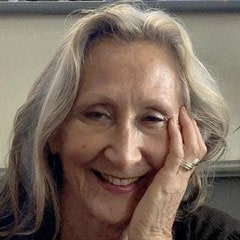 Angelika’s passion for Gestalt began with reading Fritz Perls’ books in the late 70’s and finding the theory and philosophy of Gestalt as well as its practical application life-changing.

After a decade of teaching and research in academic psychology, as well as delivering courses in personal development, Angelika began her formal training in Gestalt therapy in 1985, combining it with body-oriented approaches, as well as a five year study of psychoanalytical thinking and transpersonal approaches.

She worked for two years as a staff counsellor in a London teaching hospital, taught counselling in various training institutions and became a staff member at the Gestalt Centre London in 1995. Since then she has been involved with training and delivering short courses. Angelika also developed an approach to creative writing based on Gestalt principles, which she has been teaching for 25 years.

During her 33 years of practicing, she has developed a deeply embodied approach in working with others. She integrates a firm grounding in Gestalt philosophy, theory and practice with an appreciation of analytic thinking related to attachment and object relations, as well as an awareness of energy healing and findings from neuroscience and quantum science. This integration has resulted in her working increasingly with other practitioners in a mentoring and supervisory role.